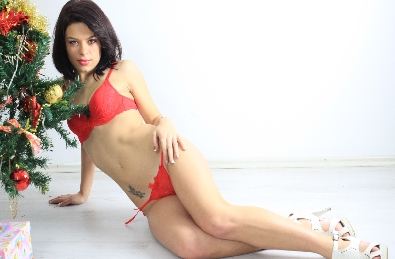 xenyia leaves nothing to the imagination. She’s untied her white lace bikini top and is teasing the strings back and forth, up and down against her plump, heavy breasts. She almost removes the bra completely but leaves it on, resting it against her tits, which are huge against her tiny frame. As she plays with the string she accidentally bares the smallest bit of nipple, nothing covering her hot little cunt. She maneuvers onto all fours and, spreading her legs, arches her back to show off her sweet curves. Her hair falls over her shoulder and into her face and she pouts into the camera.

Later, lounging on her bed in a sexy pink nightgown, she gets a message from someone who wants to chat. Bored after a little bit of typing, she lifts her pink nightgown over her head to show her breasts, which are straining against her lacy bra. The bra’s too small; her nipples peek out from under it. She brings the nightgown down along her body and leans back lusciously on her bed. She rubs her hands up and down between her breasts, brushing her fingers along the boundaries of her tits.  Then she leans over and, fingering her ass the tiniest bit, slips off her panties.